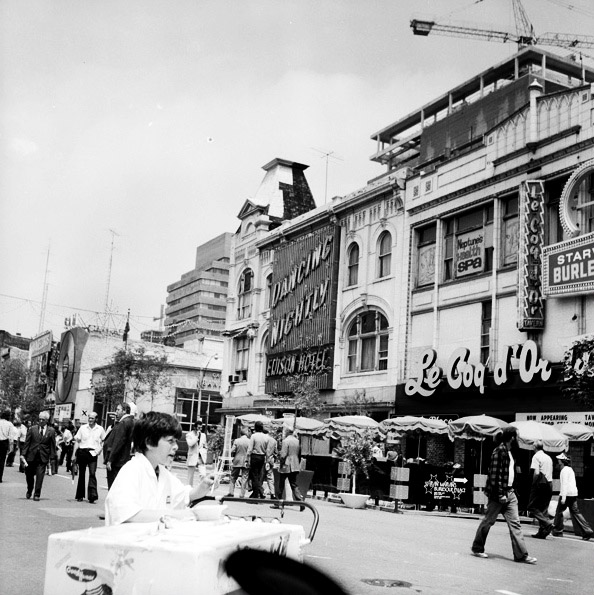 Yonge Street in the 1960s was a hotbed: racy, illicit and awash in the vibrancy of coloured neon lights. Between the garish emporiums, leather shops, dirty bookstores and gaudy triple-bill theatres, it was a place where the music of wild, wailing bluesmen could be heard pouring out of the windows and doors, and where stompin’, raunchy rock n’ roll came to life in front of packed crowds every night. There was The Colonial, Steele’s Tavern, Friar’s Tavern and The Brown Derby, Zanzibar, The Edison Hotel and The Hawks Nest amongst so many others, but it was the infamous Le Coq d’Or Tavern that became the heart and soul of the Yonge Street strip and helped to give way to what would eventually become known as the world-famous “Toronto Sound”.

Hawkins, who in the early days of rock n’ roll was often mentioned in the same breath as both Elvis Presley and Jerry Lee Lewis, and had spent many gruelling years on the road touring the honky-tonks of the Southern U.S., was prompted to head north to Toronto upon the recommendation of a good friend, Harold Jenkins. Jenkins, who would soon find fame as Conway Twitty, expressed the benefits of touring in Canada where the industry was still in its infancy and a gig at a single bar could last upwards of a month at a time.

“When we arrived in Canada, we didn’t know what to expect,” says Hawkins. “We were only 1400 miles or so away but we had no idea; we thought we’d need fur coats in the summer! There really wasn’t a rock n’ roll or rockabilly scene either when we arrived. It wasn’t in any of the clubs and they weren’t playing it on the radio yet –– it was just getting started. ‘58, that was the year when everything really began and that’s when we landed in the promised land for the first time.”

Although it really wasn’t until Rompin’ Ronnie & The Hawks blew into town that the tavern hit its stride, Le Coq d’Or had enjoyed an established presence on Yonge Street since the late 1940s. In fact, in 1947, loosened liquor laws came into effect in Ontario enabling bars to offer a mix of drinking and entertainment for the very first time. On account of this, Le Coq d’Or became a local spot for soldiers and other military men returning from World War II in search of the same kind of poise and privilege they had enjoyed the bars and eateries abroad. While at the time the tavern primarily hosted crooners and country acts (popular genres during the pre-50s post war period), it sparked the beginnings of what was to become a thriving music scene a mere decade later.

“When we started playing Le Coq d’Or there was already a pretty good clientele in place,” says Hawkins. “It was still a well-managed, high-class cocktail lounge where you had to have coats and ties––Neil Young could have never gotten in,” he laughs. “It was a really nice place, and that was something we weren’t used to down South. We played some tough places man, I’m tellin’ you, we’re lucky we’re alive.”

Though Ronnie and The Hawks split their time between Canada and the U.S. for quite a few years, when they finally settled at Le Coq d’Or Tavern (a residency they maintained six nights a week, on and off, for well over a decade), the timing was right, the tides had turned and people were hungry for authentic Southern rock n’ roll.