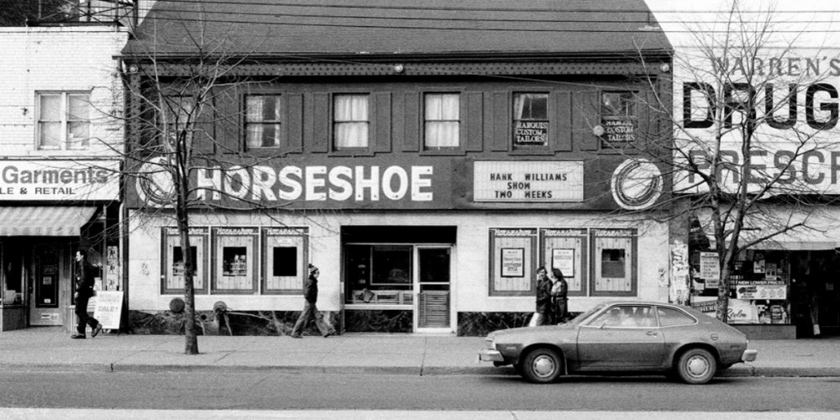 The Horseshoe, 1970s. Photo by Patrick Cummins courtesy of The Horseshoe Tavern’s website.

To some, The Horseshoe Tavern might appear to be just another local live music venue, but to most patrons of the Toronto music scene, The Shoe (as it is affectionately known) is a place that they hold dear to their hearts and somewhere where they belong. The walls, which are plastered with newspaper clippings, ticket stubs and other memorabilia, reveal a rich musical narrative that is steeped in close to 70 years of tradition. It’s a place that has bridged genres and decades, withstood the effects of urban planning and the fallout of recession, has hosted artists as fiercely rousing as Etta James and as infamous as The Rolling Stones, and has allowed a revolving cast of local weirdoes, aspiring rock gods, and musical devotees, to stomp feet, drip sweat and dance wildly, and to break bread and bottles together to a beat that has long made The Shoe the lifeblood of the Toronto music scene.

Though the property itself dates back to 1861 and had previously housed everything from a blacksmith and an engineer to two butchers, a shoe shop and a fancy goods store, when local entrepreneur and business owner Jack Starr opened The Horseshoe Tavern on December 9, 1947, his vision was a simple one: he wanted to convert his recently purchased commercial property at 368-370 Queen Street West into a friendly local eatery-tavern where patrons could come to hear country, roots and rockabilly music. Thanks to loosened liquor laws, which came into effect in Ontario earlier that same year, bars such as The Shoe were able to start serving alcohol for the very first time. Unfortunately despite this, Starr’s efforts were a bit premature. Even in the late forties, country music wasn’t yet considered “socially acceptable” and so his then 87-seat tavern quickly became something of a shit-kicker drinking hole for the genre’s most devout.

The Shoe’s early reputation wasn’t helped any by the fact that legendary bank robber Edwin Alonzo Boyd, was also a regular fixture there––something that captivated the interests of local media and overshadowed Starr’s attempts to cater to what he prophetically saw as being a burgeoning young sound. Though it wasn’t until a few years later in the mid-1950s that Toronto’s musical temperament finally turned, when it did, Starr was ready. He gutted the kitchen, put in a stage and turned his little tavern into the sort of bustling five hundred seat live music venue he’d always envisioned it to be. He hired Dick Nolan & His Blue Valley Boys as the house band and started booking country greats like Willie Nelson, Conway Twitty, Waylon Jennings, The Carter Family, Loretta Lynn, Kitty Wells, and most famously the Granddaddy of Canadiana himself, Stompin’ Tom Connors. 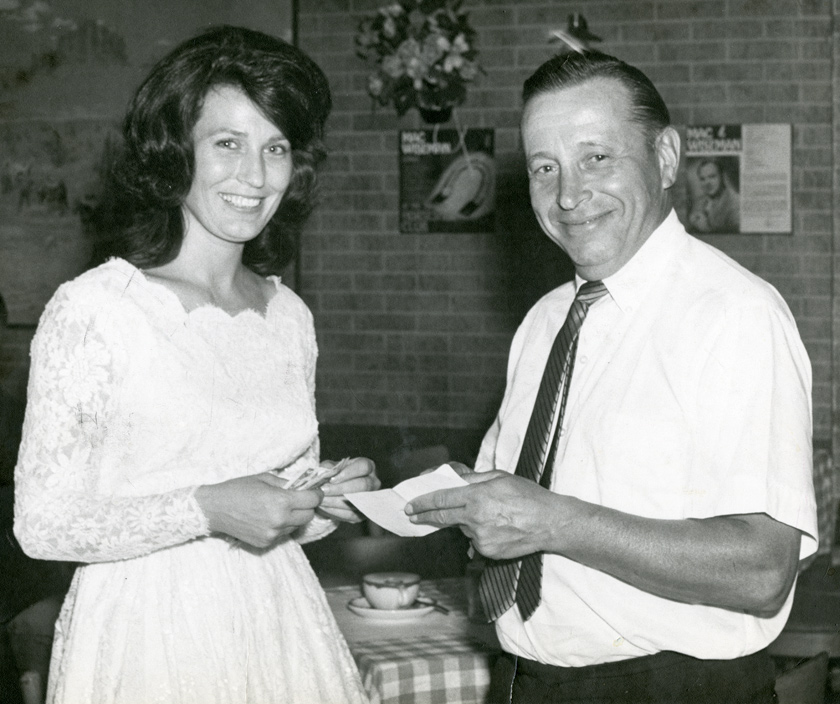 Jack Starr and Loretta Lynn. Photo supplied by the family of Jack Starr.

Starr soon became known as one of the most welcoming and most enthusiastic small club owners in Canada, often putting up artists in his own home. He was committed to the development of both national and local Canadian acts, which fueled the tavern’s day-to-day success early on. As country acts began to give way to the folk artists of the 1960s and early 1970s, local talents such as Ian and Sylvia Tyson, The Band, Bruce Cockburn and The Good Brothers all found a home at The Horseshoe.

By the time Starr decided to retire in 1976 (he sold the business while retaining ownership of the building), a whole new sound was on the horizon and it was crude, loud and sloppy, pissed off and belligerent––a far cry from the swingin’ melodies and uppity acoustic romps that defined the cowboys of yesteryear.

And so entered The Garys––that is local indie promoters Gary Topp and Gary Cormier. The Garys’ time at The Shoe was fast and furious––they were in and out in 8 months flat––but not before bringing in some of the eras most electrifying acts.

The Garys, who were introduced by mutual friend David Andoff of A&M Records, bonded over their love of music, and particularly over the band Little Feet. At the time of their meeting, Topp, whose background was primarily in film, had had previous success operating two local movie theatres, the first of which was The Original 99-Cent Roxy (’72-’76). Akin to the Bleecker Street Cinema in New York, The Roxy was something of a local counter-culture hotspot where a regular cast of characters would congregate to catch midnight screenings of things like 30s cult classic Reefer Madness, The Rocky Horror Picture Show or John Waters’ Pink Flamingos, to smoke pot out in the open, and to be exposed to the sounds of Roxy Music, Be-Bop Deluxe and AC/DC––the sort of stuff you couldn’t hear anywhere else at the time. But it was really at The New Yorker Theatre (’76-’78), which was a bit-of-a nicer lookin’ joint located along the Yonge Street Strip, that The Garys first got their feet wet promoting up-and-coming talent. They booked everyone from The Ramones and Wayne County to Cecil Taylor, Ali Akbar Khan, a young Tom Waits and even Lightnin’ Hopkins––they were all over the map. By the time they and partner Jeff Silverman took over management of The Shoe in May of ‘78, The Garys had become local underground celebrities, punk rock and new wave were making their way upstream and with their ears to the ground, they could hear it coming.

“Even in our early days, we never used trade papers or the industry to dictate what we wanted to book,” says Topp. “We booked out of our record libraries. Gary [Cormier] and I always used to call the industry types ‘closet queens’ because they never actually believed in the music like we did. We always had to fight for the acts we wanted because the record labels thought they should play The El Mocambo. I mean, someone at Capital Records once told us we’d never be able to book their bands because we didn’t have carpets. That’s just the kind of stuff that went on in those days.”

But with the city in the midst of a coming-of-age, The Garys went ahead and billed The Horseshoe as Toronto’s first ever concert club. They renovated the space, put in good PA and lighting systems, and moved the stage to its current location at the far back of the room (the stage used to sit where the bar is now). While they booked acts like The Talking Heads, The Cramps, Nash The Slash, and Richard Hell, they also famously booked The Stranglers (a show that Topp estimates was at least six hundred people over capacity), Sun Ra, Rita Marley, and a then unknown three piece out of England called The Police. The Garys’ programming also extended well beyond the punk scene and ran the gamut from jazz, folk and reggae acts to comedy nights and even the occasional film screening. 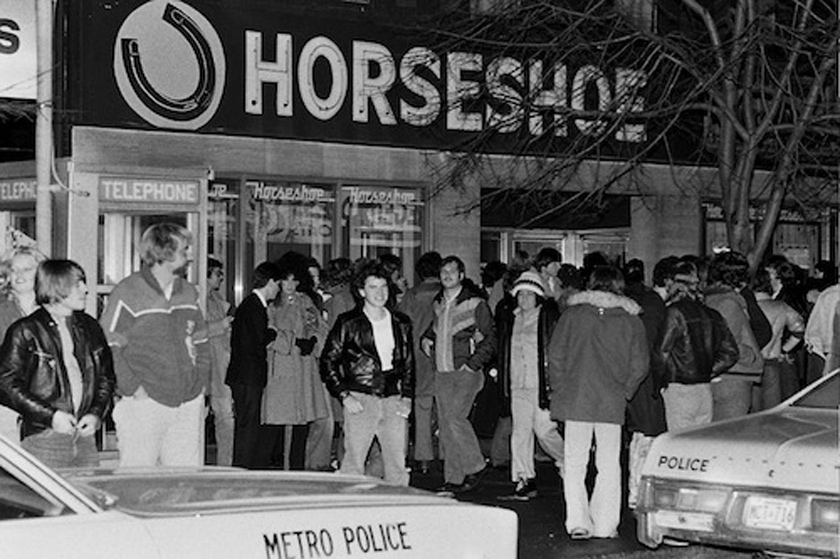 On the street after The Last Pogo. Photo by: Edie Steiner.

But, even though word had gotten out that something was happening at The Shoe and The Garys were steadfast in their approach toward only booking acts that they truly loved, they often had a hard time filling the place (the Shoe took up a lot more square footage in those days) and so were soon asked by the owners to leave.

On the evening of December 1st, 1978, eight hundred people packed into The Shoe for what was supposed to be the first of a two-night celebration. Dubbed The Last Pogo, the show featured an all-star lineup of local punk bands including The Scenics, Cardboard Brains, The Secrets, The Mods, The Ugly, The Viletones and Teenage Head.

Though they had hoped to go out with a bang, The Garys got a bit more than they bargained for that night when an off-duty police officer that was sitting in the bar attempted to shutdown the show during Teenage Head’s set. Bassist Steve Mahon tried to warn the officer that if the band didn’t get to play there would surely be trouble but he had had enough and insisted they leave the stage after their first song. Following a shortened rendition of their biggest hit, “Picture My Face,” the band dropped their equipment and walked off. The crowd, completely confused, suddenly erupted into a riot. Tables were overturned, bottles broken and chairs thrown about, Topp once described the scene as, “Sounding like a hundred chainsaws ripping down Algonquin Park.” Not only was the madness captured on film by now producer/director Colin Brunton and filmmaker Patrick Lee in their legendary short film, The Last Pogo, but the show will forever be remembered as a pivotal moment in the history of the Toronto music scene.

“You never knew what was gonna happen at The Shoe,” adds Topp. “It was an exciting time. The world was changing and we had no agenda, we just liked promoting music and we liked the music that we were promoting. For us, it was as simple as that and so that’s what we did.”

Unfortunately throughout the remainder of the seventies and into the eighties, The Shoe was a bit of a bust. Though a few owners came and went during that time, the building was eventually divided into three retail spaces before briefly changing its name to Stagger Lee’s and even operating as a strip club for a couple of months. That is until 1982 when Jack Starr came out of retirement in hopes of finding someone who could help breathe a little life back into his beloved club.

Previous post
What Bowie’s Death Has Revealed To Us About a Generation of Music Lovers
Next post
Q&A: Jeremy Dutcher