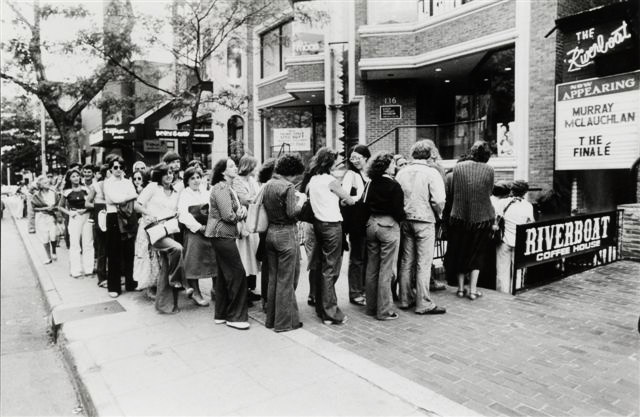 In the mid 1960’s, Toronto’s Yorkville neighborhood was a renowned musical mecca. Like Greenwich Village in New York City and Haight-Ashbury in San Francisco, Yorkville housed a vibrant and thriving artistic community and served as a launch pad for some of the era’s brightest musical talents.

Situated within a seven-block radius that is bound by Bloor Street and Davenport Rd. and extends from Yonge Street to Avenue Road, Yorkville was full of clubs, coffee houses, experimental art galleries and bohemian boutiques, bustling with a combination of acoustic and electric performances every night. There was Chez Monique (88 Yorkville Ave.), The Mynah Bird (114 Yorkville Ave.) and Penny Farthing (112 Yorkville Ave.) amongst so many others, and then there was The Riverboat coffee house. Owned by Bernie Fiedler (a one time coffee salesmen), and located below street level at 134 Yorkville Ave., The Riverboat officially opened its doors in October of 1964, and quickly grew to become the epicenter of the city’s folk music and counterculture scenes.

With its close quarters, red booths, pine walls and brass poles, The Riverboat served as the perfect setting for intimate nightly performances but was also very poorly laid out. “The entrance was on the north side of Yorkville,” explains Jane Harbury who managed The Riverboat during the early 70’s and who many came to know as Riverboat Jane. “You went down the steps and it was very narrow; the stage really only played out to the west side of the room. It was just like a submarine,” she said, “and actually Ramblin’ Jack Elliot used to make us crazy because he’d always walk in and say, ‘V-elcome to the U-boat’. We didn’t like that very much.”

The venue’s sound system wasn’t very sophisticated. “The PA system was really non-existent,” says Harbury. “We had a couple of mics and an on and off switch at the back; it was all very primitive. Sometimes somebody would say ‘can I have a little more reverb’ and we’d say ‘sure’ and one of us would look at the back and pretend to adjust things, they’d say ‘much better, thank you,’ and that was kind of how it went but we always made it work. Since the room was so small and people were there to listen, you almost didn’t need a sound system anyway.”

Being that The Riverboat was a coffee house, alcohol wasn’t typically served. Instead people came to enjoy coffee, tea, hot lemonade and apple strudel. In the venue’s early days cover charge was a mere buck-seventy-five and patrons could catch three shows a night between Tuesday and Sunday. “Playing six nights a week was such an incredible opportunity for people, especially the young Canadian artists because they were given a chance to build an audience,” says Harbury. “Bernie was amazing on that level––he was definitely ahead of the curve––people would die to have that opportunity these days.”

Over the course of nearly fifteen years the small coffee house came to host everyone from Howlin’ Wolf, Big Mama Thorton, Simon and Garfunkel, Jeff Buckley and Arlo Guthrie to Buddy Guy, Kris Kristofferson, James Taylor and Bruce Cockburn among countless others. The venue also played a significant role in the early careers of Gordon Lightfoot and Joni Mitchell who were two of The Riverboat’s most frequent performers.