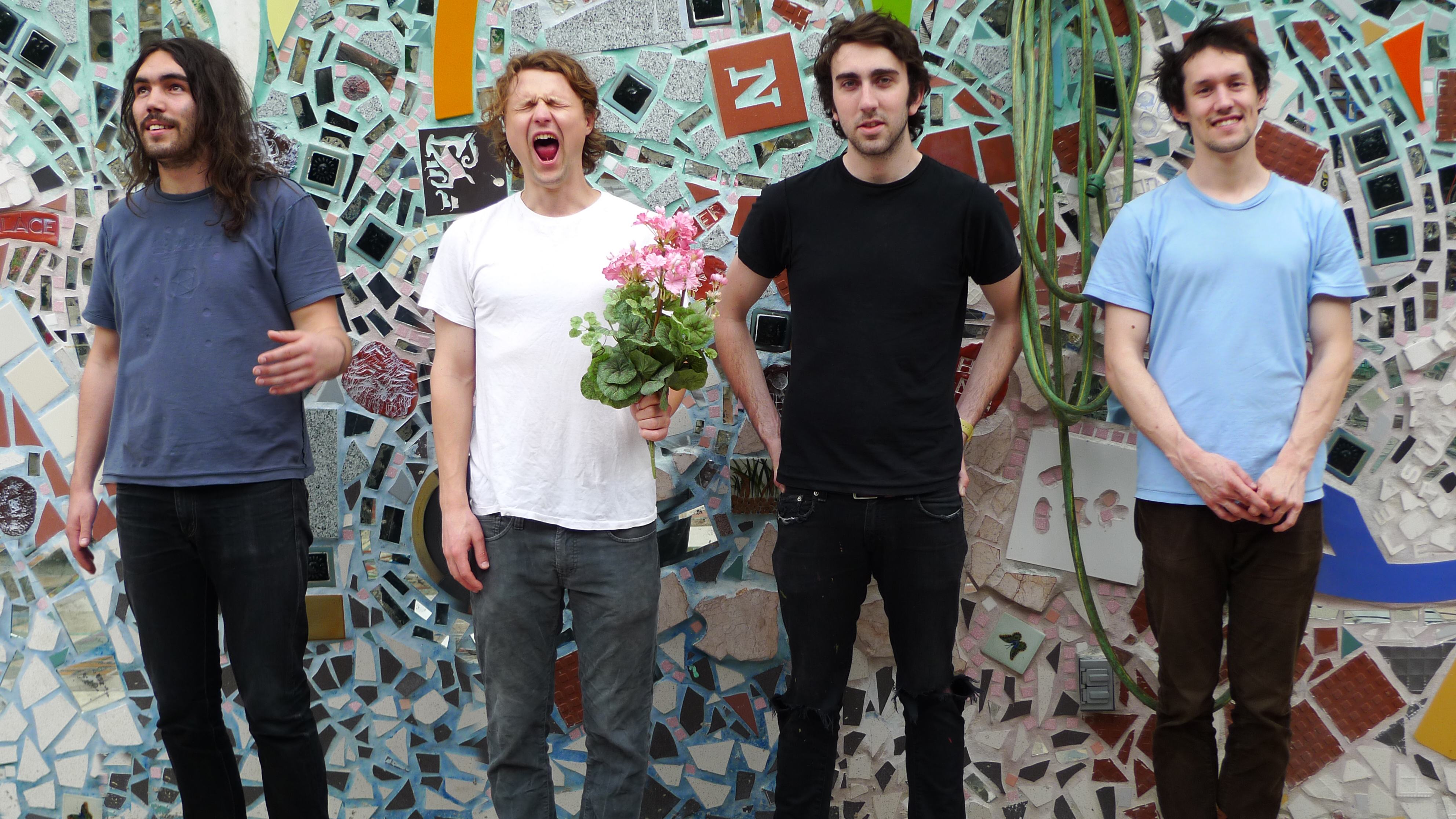 Why did I interview Hollerado over other bands? Because they just have that “je ne say qwa.” Right, my French isn’t quite up to par, so what? They’re a curious act. They’ve got something. And as I sit here cutting the crust off my sandwiches, Patsy’s smooth, uncomplicated voice asks, “Have they got me?” And so I’m thinking, “Sure I’m not the Juliette from the song,” but for an hour last Saturday we found a way to relate.

Juno Fan Fare was an interesting cross section of diehards and try even-harders. A real Canadian wonderland for the wear your sunglasses at night type. The band was late so I called up my label contact who was definitely still cuddling in the warmth of a drunken slumber and who informed me that he had absolutely no idea what I was talking about but that he would call me back once he had sorted out the matter. Real. Nice. Guy.

Interviews are a bit of a weird thing. There is always that looming possibility of awkwardness. It’s really something you can’t prepare for. Sometimes you get bands that want to put their hearts right out on the table in front of you and other times you just end up with people who get off on watching you work for it. You can usually tell which way it’s gunna go within the first 15 seconds of a conversation––this particular time it was effortless.

Our conversation was a jumble of newly renewed Saturday morning sunshine, city sirens, and the nostril-clogging odor of Toronto street meat. We had to leave the wonderland behind, as it seemed we were modestly yet decidedly cooler than everyone in the room.

I’d heard that when this band began touring their approach was to hit all the Canadian radio stations, which would seem to make sense since radio is the backbone of the Canadian music industry. Evidently I had heard wrong. A regular bunch of indie rock Freuds, their approach was a little more psychologically driven, which is why they went straight to the people with pockets and hit all the Canadian shopping malls instead. “We had four disc-mans set up with headphones and we would just walk around and try and gauge what song would identify with what person. If it was a guy that was kinda macho we’d pick a real rockin’ song, or if it was a couple of girls we’d pick a softer song, we’d totally judge them on the walk over.”

Of course one of the coolest things about Hollerado is the fact that their debut album, Record in a Bag, is a literal statement. Mind telling me about that? “Well I’d be sitting there during an eight-hour drive just burning CDs for as long as I could. Then somebody else would write Hollerado on it and throw it in a bag, and then we’d throw all of those bags in a bigger bag which is why we decided to call it Demo in a Bag, and which is why we later paid homage to the idea when we called our album Record in a Bag. Although, I’m sure we looked like real big druggies showing up at all the dollar stores trying to buy up a shit load of bags, ‘Like hey man we need more Ziplocs, we’re moving a lot of product.’”

Talk about DIY. There is something to be said about the ability of a band to take that approach, especially today. “We didn’t have a record label then and we still don’t. We had to put out our own CD. Early on there were a couple of little labels and even some bigger ones that would say “You know, we’re interested in you guys but you’d have to record a proper record and put it in a case like everybody else.” And we were just like, “Aright, good to know that’s what your idea would be but we’re gunna keep doing our idea instead.”

To anyone who thinks that’s tacky, well, you can fuck right off because if this band can literally sell a record in a bag then it must be because the music is that good. And isn’t that what the hell rock & roll is supposed to be about? The underlying point it this, Hollerado is an independent band. They were just awarded “New Artist of the Year,” at The Radio Music Awards during CMW 2011 and they were nominated in the same category during this year’s JUNO Awards. This band is proving that you can bight the hand the might feed you and still find interested eardrums and critical success after doing it.

Previous post
Industry Vs. Artist
Next post
“The Good Stuff” – What Will Become of Our Grunge Era Obsessions?