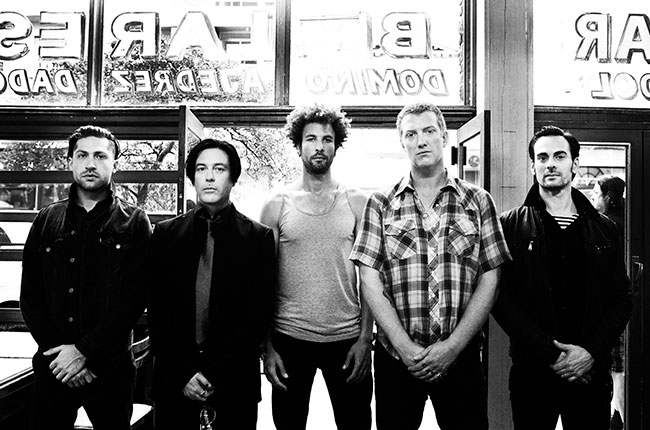 One night a few months back, I was lying in bed at 2 am and I received a phone call from Orange County, California. I generally don’t bother with calls like that. It’s no use. When I do, it’s always one of those “you’ve won a cruise” things. This time when I said hello, the voice on the other end answered with “are you alone?”

As soon as I hung up I received a text message with a link to the Queens Of The Stone Age video for “Calling All Comas.” Those fucking assholes. But, what a great idea.

I always like to see how bands approach the release of a new record, especially those that have been around for a while. Bands that planted their roots during a different time and are past the point of having something to prove, are usually the ones that come up with the most creative ways to remain exciting and relevant. This time around, Queens did an unbelievable job of building the anticipation around their latest record …Like Clockwork, and I dig these guys ’cause they have their cool factor down to an art.

When it comes to Queens, everything from their music to their visual aesthetic just has this dark, frenetic quality. It sweats like a fiend, it’s full of sex, and it feels like you’re darting down long stretches of desert highway with crazy eyes.

Tuesday night at the ACC in Toronto, that was on full display. They dropped into “My God Is The Sun” right off the top, and then took their time getting through the majority of the rest of the album. Homme doesn’t do much talkin’ and when he does he speaks mostly in mumbles, but I’ve never realized quite how much he moves like Elvis. He has those loosey-goosey legs that collapse inwards on themselves, but it feels totally reactionary; like a habit he picked up in childhood and never bothered to break.

Nothing was as sweet as when they dropped into hits like “No One Knows,” “Little Sister,” “Go With The Flow,” and “Sick, Sick, Sick.” Those are songs you’d die to hear outside of your speakers. But, there was a moment during “Make It Wit Chu,” where something heavy was hanging in the air. I don’t know what it is about that song man…

Queens is a band that’s about the music. They just have this raw, relentless quality that makes your nostrils flare and your neck give out. The reason we we love ‘em is cause they feel like something that happens behind closed doors and in the middle of the night.