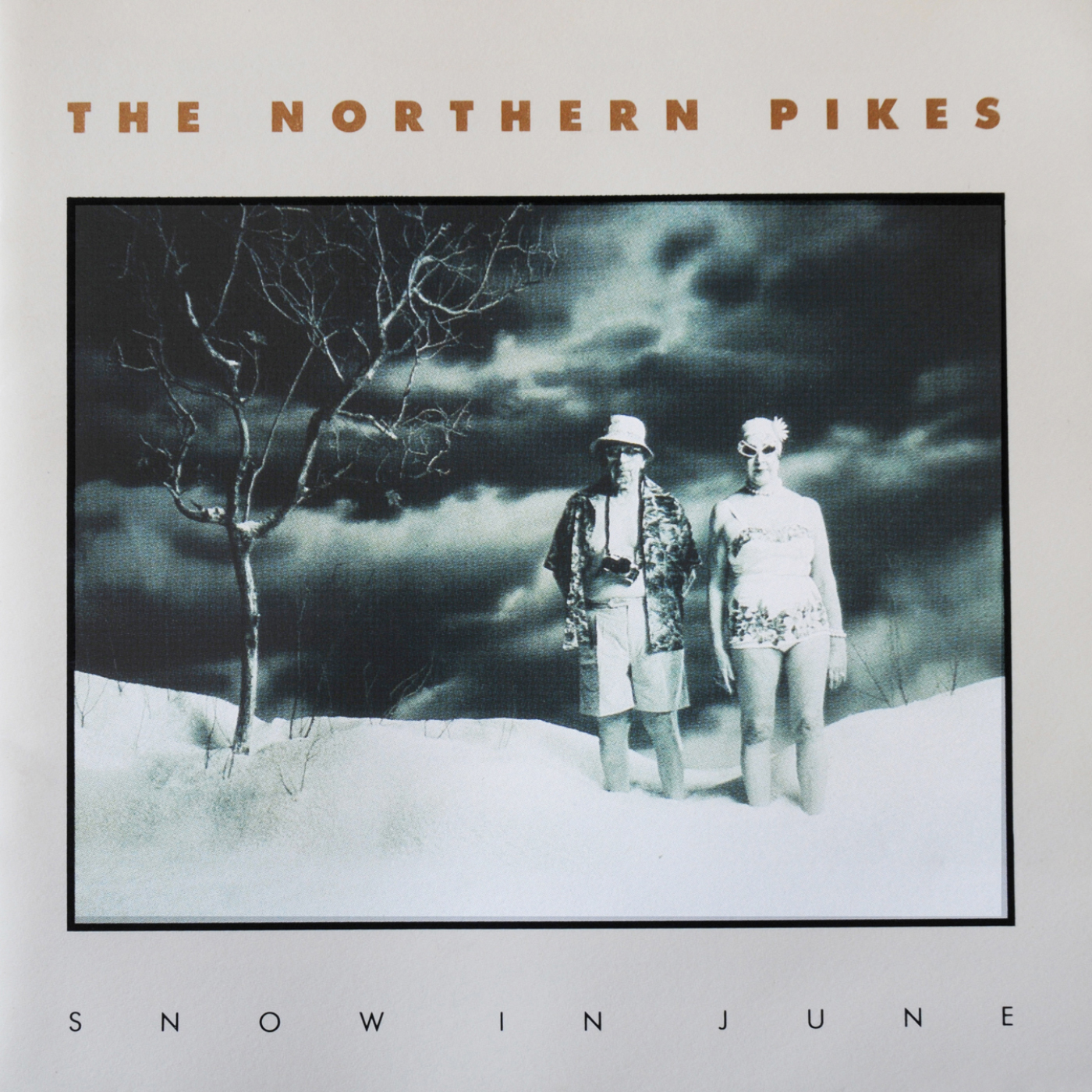 When the Northern Pikes got their start in Saskatoon, Saskatchewan in 1984, the city wasn’t exactly the hotbed of Canadian musical culture. For a group of hungry, young musicians who were hoping to combat hair metal and new wave with a guitar rock sound of their own, theirs was an isolated existence.

“This is not a dig because it was just the reality of the time,” says Pikes singer, songwriter, and guitarist Bryan Potvin, “but musically speaking, Saskatoon was a relatively sheltered place in those days. Frankly, there was a lot of bush around us,” he adds with a laugh. “Growing up in a place like that you relied on certain lifelines like Don Kirshner’s Rock Concert, which aired Friday evenings at 11:30 pm, and on places like Records On Wheels, where we’d go to pick up month old copies of NME magazine. Of course, they were out of date, but we read them because it gave us an idea of what was going on not only in places like Toronto, Vancouver, and the rest of Canada, but across the ocean and in the U.S. as well.”

Luckily, as is often the case in small, rural towns, a fledgling local rock scene emerged in Saskatoon. This gave Potvin and fellow bandmates Jay Semko, Merl Bryck, and Don Schmid––who first met while they were members of various other local acts including The Idols, Doris Daye, and 17 Envelope––the opportunity to develop themselves into a well rounded live act.

The only problem was there really wasn’t much work around town for bands that wanted to play their own tunes.

“When Jay and I decided to put the band together,” says Potvin, “we thought, ‘Okay, why don’t we learn some cover songs? Why don’t we go out there and actually work?’”

In those days, weeklong residencies at local bars were common. Most venues would host a house band Monday through Friday, and the expectation was that they’d play popular songs and do three to four sets a night.

“We did countless engagements like that all over Saskatchewan in these small, bizarre, backwater towns like Weyburn and Fort Qu’Appelle. We’d stay in these really, really unattractive places,” says Potvin with a laugh, “but it worked. You’d play four 45s a night, and then at the end of the evening around last call, you’d get to play your three rowdiest tunes.

“We’d go out there and play a bunch of songs by the Stones, the Beatles, and the Kinks, and then we’d just blend our own stuff into the mix. Every so often we’d tell the crowd, ‘Hey! Here’s a new one by so-and-so!’ And we’d just make up some fake song title by some fake artist only it would be one of our own. Nobody had a clue.

“We knew pretty early on that if we wanted to be the real deal, we were going to have to figure out how to be a good live band, how to write good songs, and how to record,” adds Potvin. “I think we turned ourselves into a real band that first year.”

With two EPs of original material––The Northern Pikes (1984) and Scene in North America (1985)––already under their belts, the Pikes decided it was time to get creative about how to bring their music to the outside world, and called up The Library of Congress to ask for a comprehensive list of college radio stations across the U.S..

“I don’t know who came up with that idea, but it was sort of genius,” says Potvin. “We had piles of records, envelopes, postage, and mailing addresses, and we turned Jay’s basement into a mailing room.”

In addition to the band’s EPs, included in each package was a self-addressed stamped comment card.

“When we started getting the comment cards back it was like, ‘Hey guys. Great job!’ And it would be from some station in Cincinnati or some place like that. It was an extremely exciting time, and I’ll never forget that,” he adds. “It was like, ‘Okay. We’re on our way. Let’s just keep doing more of this.’”

It wasn’t long before the Pikes caught the attention of Doug Chappell, president of Virgin Records Canada who was intrigued by their multi-singer, multi-songwriter sound and signed the band in 1986.

The following year, the Pikes released their major label debut Big Blue Sky, which contained their first significant Canadian hit, “Teenland.” Penned by Pikes’ singer, songwriter, and bassist Jay Semko, the song not only garnered the band critical acclaim, but also opened them up to a whole new facet of the listening public when the video for the song entered heavy rotation on both MuchMusic and MTV.

(The album was re-released by Universal Music Canada as Big Blue Sky (Super-Sized) in November of last year to commemorate the 30th anniversary of its original release.)

The album produced two additional singles, “Things I Do For Money” and “Dancing at a Dance Club,” and was eventually certified gold in Canada effectively launching the Pikes’ career. What followed was an intense six-year period during which the band released four hit albums, upward of a dozen singles, and opened for acts like Duran Duran, David Bowie, and the Fixx.

But, it was their third studio album, 1990’s Snow In June, that yielded the band’s career record, the now iconic “She Ain’t Pretty.”

“You know, I’ve been telling this story on the road quite a bit lately because these days there is as much yapping and storytelling as there is playing,” says Potvin, “but I actually came up with the hook for that song at Doug Chappell’s house. His daughter and I were later married, but we were still dating at that time, and the Chappells were always super nice about having me stay at their house when I had some time off.

“That particular evening I was tucked into my little hide-a-bed in Doug’s guest room,” he recalls with a laugh, “just flippin’ channels, and I came across an episode of Rhoda, which of course was a spinoff of The Mary Tyler Moore Show.

“In a very general sense, there was a conversation going on between an attractive woman and a not so attractive woman. One woman said, ‘Look at you. What could possibly be wrong with your life?’ And the other woman replied, ‘I’m not really beautiful, I just look that way.’

“Well, I thought that was pretty funny, so I wrote it down in my little notebook and went to bed. Later, one day while I was sitting at home, I took out my notebook, saw that line again, and it sort of jumped out at me. I jammed it out pretty quickly, and what I wound up with was “She Ain’t Pretty.”

When it came time for the Pikes to discuss new demos, Potvin was initially reluctant to share the song with his bandmates.

“I remember when we had our pre-demo meetings, we’d go to someone’s house, bring some acoustic guitars, and kind of swap what we had been working on. I almost didn’t play it for the guys because it’s kind of goofy and I think I was embarrassed by it back then. I mean, the song is pretty rollicking, and it’s just got that bar room rock thing to it, which we weren’t really doing a ton of yet. Anyway, I did play it for them and luckily they thought it was great. We took it to the label, everyone there agreed that it was the obvious hit, and so we all sort of looked at each other and said, ‘Okay, let’s roll with it!’”

Certified platinum in Canada, “She Ain’t Pretty” was a massive success. Nominated for 3 Juno Awards in 1991 (Group of The Year, Single of The Year, and Best Video), the song ultimately became the biggest hit of the Pikes’ career.

Though the band announced an indefinite hiatus in 1993, they joined forces again before the decade’s end in 1999, and have continued to tour and release new music independently.

“A lot of people have some very meaningful memories that took shape around our music,” says Potvin. “We heard endlessly about that on our most recent cross-Canada tour, and that was very satisfying. You’d think that one would sort of get tired of talking nostalgically to people, but it wasn’t like that––it was lovely. It was a celebration of parts of people’s lives, and for whatever reason, that group of people, that portion of the population that is 40 to 60-years-old, they’ve decided that our music is a part of that magic playlist that they want to hear over and over again whether it’s at the doctor’s office or the grocery store or wherever it is.”

In a big strokes kind of way, Potvin says the band is aware that they only have a certain amount of time left, but that while they “still sound good and all kind of look decent,” they plan to get out there and perform for their fans as much as they can.

“Right now it’s kind of like, ‘Hey, we’re still playing well and our audience is still here,’ and that’s truly amazing,” says Potvin. “We’re so thankful for that. It’s really what fuels us. And, it’s how we plan to continue moving for the next several years.”