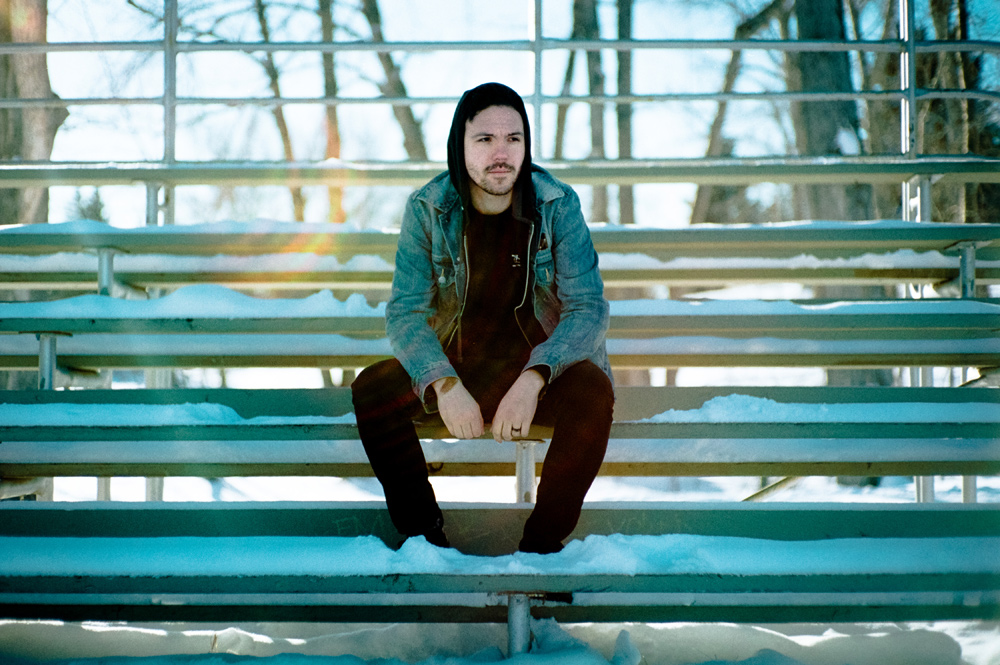 Lambrinoudis also goes by the name Corinthian, and is a dedicated hardware techno artist. The project, which hinges on the fundamentals of urban techno, dance, and minimalism, couples audio and visual components with recorded sound and live performance to create a deeply stirring cinematic experience.

His last album, Eurozone Ghost, which was propelled by its own moody drawl and an array of endless droning beats, painted a sweeping portrait of the global financial crisis of 2007-2008.

But, Lambrinoudis isn’t trying to be grim; the music is his gut response to these crazy times we live in. It’s his way of digesting life in an era marred by political extremism, fear, and hate, and it’s his personal contribution to the larger cultural conversation.

As an artist, label head, and active member of Calgary’s electronic scene for more than 15 years, Lambrinoudis views electronic music as an emotional language––one that can serve society both by reflecting its collective heartache and acting as an escape from it.

I want to talk a bit about each of your current projects but why don’t we start with Corinthian. You’ve been known to explore some pretty heavy themes that often reflect the current state of society. When you look out onto that landscape how do turn that confusion and misery into inspiration and into something you can communicate musically?

“The easiest way for me to develop the themes for this project has been to explore them through the ease and accessibility of the Internet. There is always this constant dialogue that is happening where people are posting things, we all make a judgment on something, and everyone is really strongly routed in whatever it is they believe. It’s a lot like this terror-dome of opinions and ideas that are clashing and no one’s really getting along.

“As an artist, what I’m trying to do is present those themes from my perspective in terms of the way I’m interacting with them. I’m also trying to find ways to communicate the things that matter to me like my culture, my history, the people around me and the things that are affecting them. A lot of times that’s not necessarily as a conversation but as something a bit more vague that you can’t fact check on Wikipedia and that requires interpretation and some metabolizing.

“The subject matter is, as you said, quite heavy, but I also feel it’s appropriate for the heavy times. Essentially, through the subtlety of visuals and music I’m trying to find ways to communicate that aren’t so hostile but creative instead.”

Obviously there is a great deal of fear and hostility stewing in the culture right now. To be able to address and express that in a way that is artistic rather than combative is probably more important than ever.

“Definitely. It’s the only thing that I feel I have that is relevant to add to the conversation, you know? In other interviews I’ve often talked about how the things that I am interested in are surrounded by this idea of the underdogs of society. I don’t necessarily fall into that category; I’m not a very rich person and I didn’t grow up rich, but I’ve had a lot of other privileges that a lot of people don’t have. So, for me, rather than taking the stage to stand up and tell others what I think is right, I just sort of tell my own story through the art that I’m making and the way I’m dealing with these things.”

As Corinthian, you perform all of your songs live using hardware like synthesizers and samplers rather than a laptop. That’s quite the opposite of your work with Sanctums. Why was that important for you?

“Having worked on other projects where that was more of a priority, when I started Corinthian I decided immediately that I wanted to do things differently. At the time, I was also really interested in physicality and also the intersection of industrial production and art.

“When you think about using machines, it’s really the machines that are making the music; it’s different than when someone is playing the guitar or playing a concerto. What I’m doing is much closer to a person who works in a machine shop or who is working with delicate tools to make jewelry. The idea was to do something really physical and the only way I was going to be able to do that was by harnessing the machines and sort of creating that conversation with them.”

In a time when most things are as simple as a push of a button and the average person can’t explain the inner workings of the technology that facilitates how they live every single day, there’s something to taking the time to learn your instrument intimately. It’s not unlike driving a car––it will not take you where you need to go unless you know how to operate it.

“Exactly. I like those limitations and I guess the engineer in me also enjoys something that’s convoluted. It’s sort of like a Rube Goldberg machine where you have all of these wires that are all connected but don’t always work. They are clunky and take hundreds of hours to learn, but within all of that complication there’s something creative happening and you’re able to harness that and use it. I just think that’s so cool, and it’s way more interesting to me than pressing play. There’s more risk involved.”

You mentioned limitations. Even though the instrument has these parameters, engaging with them seems oddly freeing in a way. Is it because you want to find out how much you can or can’t do within those boundaries?

“Yeah, and for me as a buyer and often collector of synthesizers and pedals I go through these cycles where I’ll get a bunch of stuff, think that I have too much, pick three things that I like, sell the rest, and only use those three things until I’ve pretty much used them up. Then I think maybe I need a few more things, and then I think I have too much again. [Laughs] Part of the fun of this project is that it’s not like you have your signature item, you know? Between the songs and the albums especially, I can kind of say that I’ve recycled the whole kit into something different and have been able to fit it to exactly that moment or the sound that I was trying to achieve at that time.”

We briefly touched upon Sanctums, which is your DJ project with Dan Solo, but let’s go a bit deeper into that. You guys have addressed some of the same themes that have appeared on various Corinthian albums, but this project seems much more focused on the storytelling that happens in the spaces between the sounds and the beats.

“Dan and I have had this sort of lifelong collaboration. When we’re writing, we do a lot of driving around and we’ll just build a really strong narrative that is very conceptualized because we both really love movies and stories. As for the way the sounds work, one of the reasons that Sanctums is so different than the other projects that I’m doing is because when we started the whole thing it was really rooted in that we were both DJ kind of people, and that Dan was just starting his family and I’m such a family guy. While all of his other friends were like, ‘Yeah, I don’t know if I’m going to hang out with you cause you’ve got a baby and stuff,’ I grew up around kids, I have four sisters, so family is super important to me and we kind of got closer through that. The types of stories that we tell and the type of music that we play, we really think about our families when we’re writing it.”

“On one level there is the narrative that we put out to the world, but on a deeper level I think there’s a lot of us just thinking about those softer moments, like when one of your siblings falls off the couch or you see kids drawing or something, you know? Those moments that aren’t necessarily as hyped up in the nightlife. It’s just about seeing the beauty in the mundane.

“With the Corinthian stuff I’m a bit more steadfast, I kind of just know, not like it’s me against the world but I feel like it’s me sort of putting out this statement about myself. Whereas with the Sanctums stuff, when we’re working together, I get very emotional about the songs and I feel almost touchy about the writing; it’s definitely a process with Dan and I.”