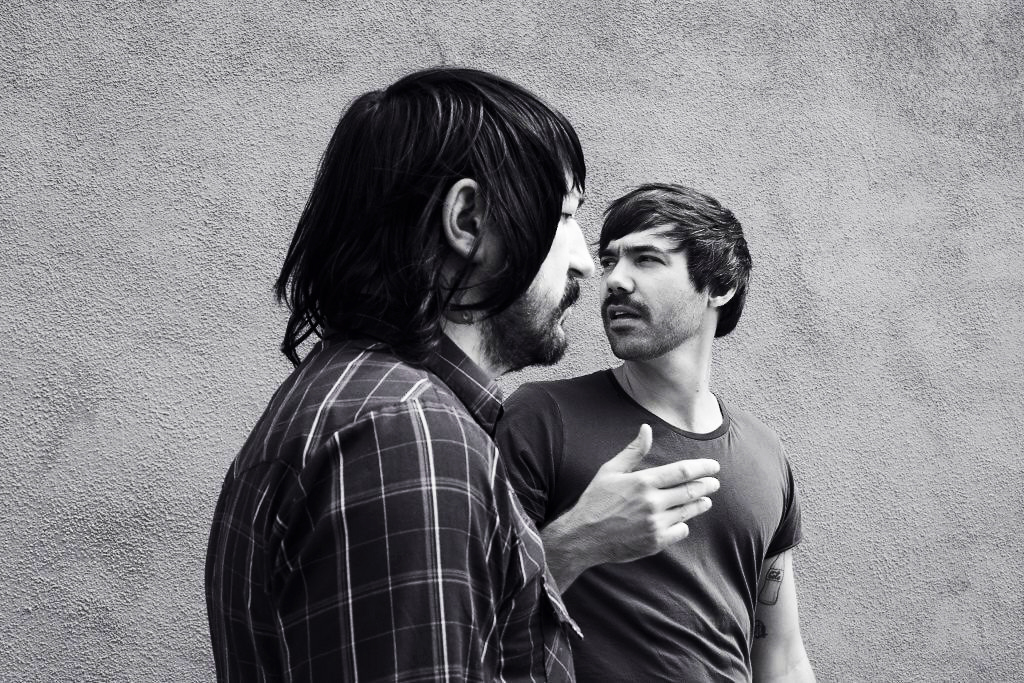 It’s already been 10 years since Toronto’s Death From Above 1979 erupted from the city’s underground with their explosive debut album You’re A Woman, I’m A Machine. Packed with pounding dream beats and the kind of fervorous bass lines that sound like a hacksaw cutting through sheet metal, the album was 35 sweaty, libido-charged minutes of sarcastically delivered human desperation; in short, it was pure electricity.

Despite having only released one full-length album prior to their break-up a mere two years later in 2006, DFA’s rabid cult following has only continued to grow. When news of a long-awaited second album, The Physical World, broke in early 2014, it became clear that no love has been lost, and that not even a decade has lessened expectations for the follow up.

We spoke with Jesse F. Keeler (bass, synths, backing vocals) and Sebastien Grainger (vocals and drums) in Toronto recently to find out what prompted the pair to finally write a follow-up to 2004’s You’re A Woman, I’m A Machine, what it was like to work together again, and at what point they have to take a step back and watch the album take on a life of its own.

You’re coming up on the release of your new album, The Physical World, on September 9. Where are you at in terms of headspace right now?

Sebastien Grainger: I’m happy to have it out because we’ve been sitting on it for a while now.

Jesse F. Keeler: You know, it’s like we’ve designed and built an apartment building and now the vacancy sign is up and people are finally moving in. It’s like now you can take a step back to watch and it’s great to see people enjoying the thing that you’ve built. That’s really the best way I can describe it, because once we’re done with it, everything that happens after the moment we say, ‘Okay, that’s it, it’s finished,’ is up to the fans. I mean, the songs are alive for us, but our involvement with it ends there, then it’s up to them.

What prompted the decision to put out a new record as Death From Above 1979 now, at what is possibly one of the most fragmented eras in Canadian rock music?

SG: Well to be honest, and this is not to be disparaging, but we’ve never really considered ourselves in the context of Canadian music. It’s always just been up and out, and out is everywhere, so I can’t say I’m observing Canadian music specifically, but I think as a whole, music to me is missing a component right now.

JFK: Well, let’s say rock music is missing a component because there is a lot of great Canadian techno and other types of music being made right now, and I’m very proud of a lot of those acts. At the same time, we know that there are awesome fucking rock bands playing here every day, and I’ve seen some recently, but yeah, in terms of the stuff that gets the recognition…

There really are a ton of great rock acts in Canada right now, but at the same time do you think it’s fair to say that most aren’t getting the type of recognition they arguably deserve?

JFK: Here’s the thing: no one really deserves anything. You still have to account for circumstances and luck and sometimes just the level of sacrifice involved. There are honestly so few tangible things that I could point out in terms of why it worked out for us and it doesn’t for so many other people. It’s like if someone asked me, “Who is a great guitarist?” I’d tell them to go down to Guitar Centre and wait. One of the best guitar players I’ve ever heard was some kid with a shaved head sitting in Song Bird, and I was just standing next to him thinking, ‘What the fuck is going on?’ At the same time, my dad always used to tell me that all the best players are just hanging out at a music store with no band, and he was right, because there are so many other things involved in getting to a place where people pay attention. Man, if we knew why that was, we could quit playing music all together and just start doing seminars on how to “make it” [laughs]. But I don’t think we’ll ever feel like we’ve made it.

I think if there is some sort of secret code though it’s that you have to feel continuously dissatisfied with things and always have a goal that is far beyond where you are at—it needs to be constantly changing. A lot of people get distracted by the initial success and think, “Oh look, somebody likes my music, we’re making it,” or “Look my song got played on the radio.” That’s all good, if you are satisfied by it, but I mean we’re now sitting here and we have a never-ending stream of goals that are beyond what we have done. Before we even finished this record, I was already thinking about all the things we could have done differently or that we should do on the next one.

How did you go about writing this new record? Was it at all like putting the first one together or a completely new thing?

SG: A little bit yeah. The first record started with some basic songs that Jesse wrote without any real intention of it becoming a bass and drum band. He just wrote these three or four songs, demoed them and had them on a CD, and we’d just drive around listening to them. At a certain point I was like, “We should do this, these songs are good and we should really play these.”

JFK: So, you were the instigator both times then, ’cause I would have just been content to let them sit there. [laughs]

SG: Yeah maybe, though I feel you were the instigator, but who knows. Maybe we light each other’s fires, baby. [laughs]

Anyways, this process started again with Jesse sending me some demos of a few songs, which got the ball rolling. Then we got a room together, started playing and writing together, so it was similar in that sense but also different in a lot of other ways.

SG: Well, when we made You’re A Woman, I’m A Machine, I hadn’t recorded anything ever, so the first time I actually made a record was together with Jesse. He had made a bunch of records by that point though.

JFK: Yeah, but I hadn’t ever been so involved before then. With all the other music I’d recorded I just sat there kind of clueless going, “What does this do?” or “Can I turn this? Oh, maybe I should leave that alone. What’s a compressor do?” [laughs]