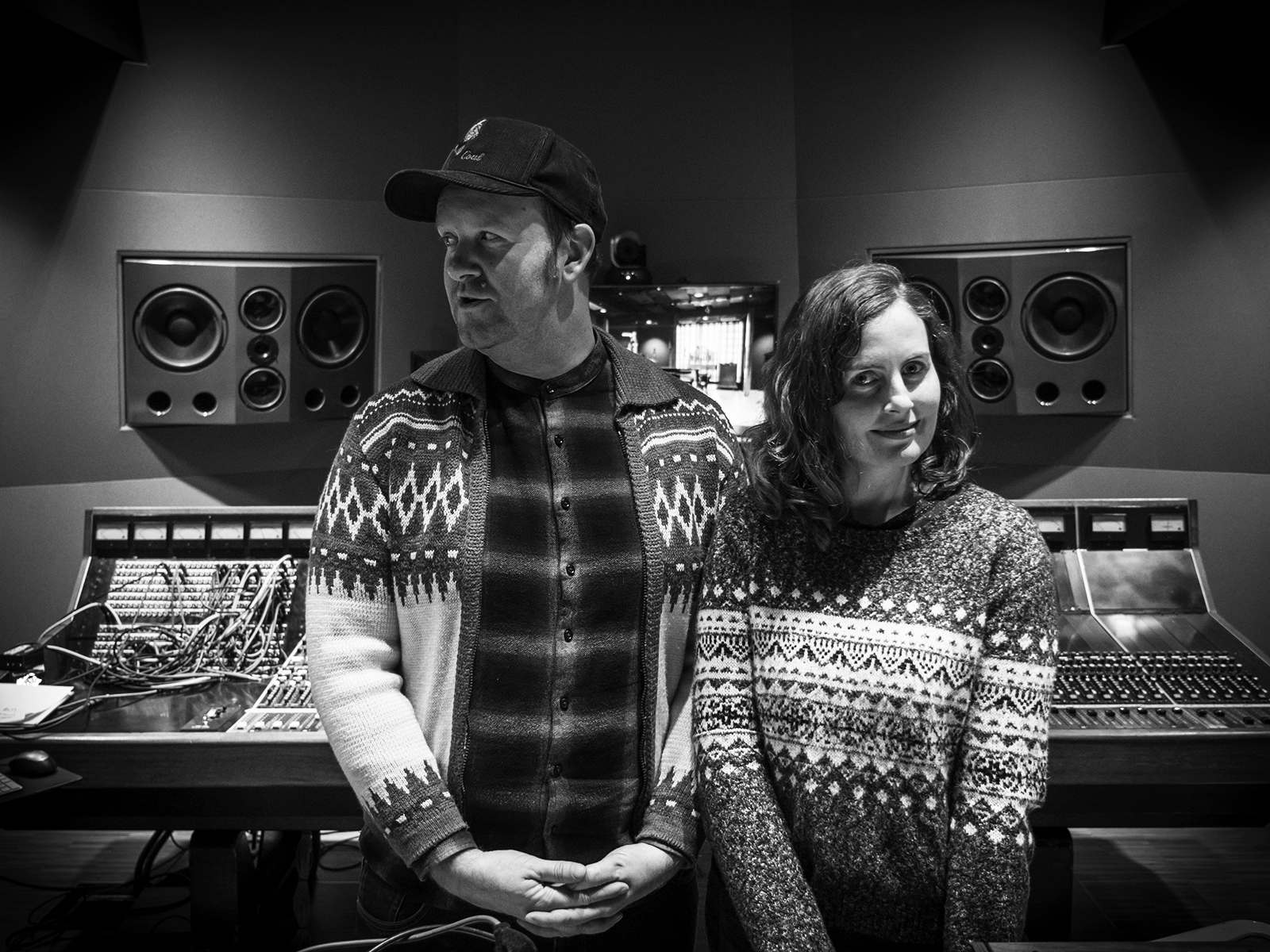 Fruitful creative partnerships require a definitive kind of trust. Without that trust they fall short of achieving any true sense of vulnerability.

For industry vets Kathryn Calder (Immaculate Machine, The New Pornographers) and Mark Andrew Hamilton (Woodpigeon) that kinship is something they recognized in one another almost instantaneously.

Having met at Calder’s home studio on Vancouver Island during a session for Woodpigeon’s last album, 2016’s
T R O U B L E, the two bonded over tea and touring and have no doubt become lifelong friends.

With both Calder and Hamilton being accomplished solo artists in their own right (Calder has released three solo records to date and a total of 10 albums over the course of her career while Hamilton has released six full-length LPs) the notion of stepping outside of their comfort zones as writers to someday record an album together surfaced quite naturally.

Though the project took a few years the find its footing, the pair, who come armed with mutual admiration, genuine humour, and a stunning capacity for musical honesty, are now poised to debut the aptly titled, FRONTPERSON, during their residency at Studio Bell, home of the National Music Centre, beginning February 1, 2017.

Frankly, I can’t help but wait with bated breath for this record to arrive!

Why don’t we start by talking about how you guys met and why you’ve decided to collaborate on this new project, FRONTPERSON?

Kathryn Calder: If my memory serves me correctly, Mark was over at our studio on Vancouver Island recording his last album, T R O U B L E, and he was staying at our house. Was that the first time we met though Mark?

Mark Andrew Hamilton: I think the first time we met was in your living room and you were in your pajamas. [Laughs]

MAH: Yup. You were. Or floral patterned sweatpants…

KC: Okay, I do not own floral patterned sweatpants thank you very much­­––I think they were probably plaid. [Laughs] Anyway, we met there and then I think I was over at Mark’s place in Vancouver having tea one day and somehow the idea of us working together came up. This was a few years ago now but we basically decided we should make a record together. We talked about it for a long time and now it’s finally happening.

What is the vision for the new project? What’s FRONTPERSON all about?

KC: I feel like our plan for this project is to completely wing it. I think we’re going to get to the National Music Centre, see how many instruments we can get our hands on, and ultimately how much we can put onto a record in 10 days. We do have some songs that we’ve been writing together and that we’ve each been contributing to, but I think we’re just going to see how it goes.

I feel really good about going into this project with the idea that what’s going to come out of it is going to be spontaneous and natural, and that it’s all going to be kind of instinctual—that’s an exciting thing for me.

KC: It’ll probably be both!

Making a spontaneous record with another person takes a certain amount of trust does it not? I think you really have to know a person in order for that to come through.

MAH: Absolutely. It can take a long time to trust someone creatively but I think Kathryn and I have that now.

KC: I really like that we’re going into this as a team as well because I’ve been in charge of the last two solo records that I’ve done and so it’s kind of nice to have somebody who is equally invested. This time we’re both contributing and we’re each in it for the songs to be the best they can be. I have a really good feeling about it––I think it’s going to be great. Or it could be a total disaster Mark! [Laughs]

You both have experience working as solo artists but also as part of collectives—you Kathryn with The New Pornographers and you Mark as Woodpigeon. Do you think working together on this new project will be akin to those previous writing experiences or will this be something completely new for both of you?

MAH: Well, for the most part, most of the collectives I’ve worked with have been singing my songs. During those years when we were an eight to fourteen piece band all based in Calgary, that was definitely a collective environment in that we were a group of friends who all loved each other, but again I wrote all the songs. Each musician would add their own unique thing to it but other than the Icelandic band I later had, I don’t have much experience writing with other people, which is why I’m so excited about writing with Kathryn.

KC: For me, I think the last time I was actually writing songs with somebody would be back in my previous band, Immaculate Machine, way back in 2007 or something. So, it’s nice to share that again.

With the New Pornographers, it’s very different. Carl [Newman] or Dan [Bejar] write the songs and we come in and contribute, but like Mark was saying, the songs are already written. It’s definitely a new way of writing, and I think throwing us together for a residency is really just perfect for this project.

I’ve had the chance to speak with a handful of artists now prior to their residencies and it seems as though, almost by accident, something pretty cool is starting to emerge. Though, as you said, everyone is working on their own unique project, collectively, all of these songs and all of these albums that have been written inside this space and using this very rare collection of instruments are starting to form a musical quilt of sorts that will forever have the National Music Centre’s stamp on it.

MAH: I really like the idea that other people are also doing this residency but that they’re all coming at their art in their own way. I also like the idea that there will be people coming in just to see what develops. Some will probably be happy with one song and others might create 20, who knows!

For us, especially getting to be two of the first crop of artists to do this at the National Music Centre, it’s just really cool. I think our goal is not necessarily to see where the instruments lead us but to use them to construct something and have that as a document.

Are you guys hoping to make an album then?

KC: Yeah, I think we’re going to try and make an album. We’ve got a limited amount of time and that seems like a good deadline. Then at the end of it once it’s all said and done, we’ll get some time to think about it and see what we want to change, if anything, you know? I think that’s a really great way to start a record or even to finish one. Ideally, you want to go in with a burst, know you have a certain amount of time, work really hard to finish it, and then see where you end up at the end of it.

MAH: I think the beautiful thing about being at NMC is that if you’re in the middle of something and suddenly think, ‘You know what would sound great on this? Some mellotron!’ You can snap your fingers and there it is.

KC: I’m pretty excited about the idea of having that sort of access to instruments as well. For me, I‘m a keyboard player so I’ve been in studios before where they have a really big collection of synths and I definitely find that each instrument has its own very specific habits or a thing that it’s particularly good at or just something that it will inspire all on its own.

When you change from one physical instrument to another, what you come up with is different than if you’re just working with a controller, a single keyboard, and a bunch of synths in the computer. I’ve worked that way as well and I do love it but for different reasons because having the ability to move from instrument to instrument changes the way you think about structure and about melody—it’s just a really neat way to write a song.

MAH: I think it really makes you respect the capabilities and limitations of an instrument as well. If you are working with a synthetic mellotron for example (and you’ve probably noticed how much I love mellotrons) you can move it, tweak it, sample things, and make them into something different. It’s as if the National Music Centre is giving us all of this wood and these nails and hammers and saying, ‘Build something!’

Why don’t we talk about an album or artist that is close to each of your hearts and why?

KC: Yes, aside from Mark [laughs] I guess the person who really comes to mind is Joni Mitchell. I mean Joni is practically from another planet––that’s how good her songwriting is and how beautiful and thoughtful her lyrics are. She uses all of these different unusual tunings, and it’s as if you can’t even begin to emulate her songwriting because it is so inimitable, you know? For her, it’s just totally natural. For the rest of us, we can’t even begin to understand it. Her level of songwriting is like the bar I set for myself, even though it’s probably never going to happen. [Laughs]

Or even someone like Paul Simon. I grew up with a lot of Paul Simon records like Graceland, and his lyrics are just really great. They’re always about all kinds of things that you wouldn’t necessarily think of writing about, and he uses these chord changes that seem to come out of nowhere but never feel out of place.

For me, those are the two artists that I spent a lot of time with growing up, both in terms of listening to their records and feeling really strongly influenced by them in my life.