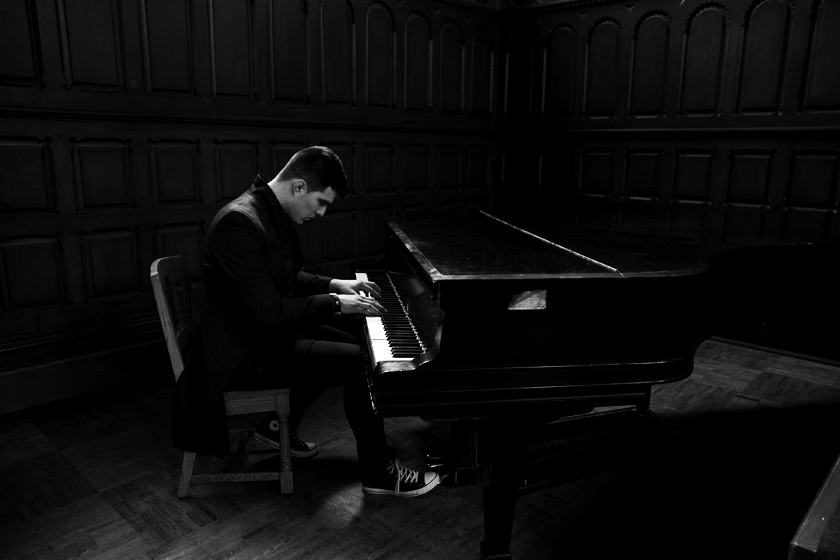 Though now based in Toronto, composer and trained operatic tenor, Jeremy Dutcher, knows for certain that his roots are firmly planted in the Wolastoq territory of the Saint John River Valley. A proud member of the Wolastoq (Maliseet) Nation, Dutcher’s forthcoming release, Wolastoqiyik Lintuwakonawa (Maliseet Songs), is a unique musical glimpse into the lives of his ancestors.

Centered around the reclamation of Ethnographer William Mechling’s wax cylinder phonograph recordings from the early 1900s­­­, the album, which shape-shifts between classical, contemporary, traditional, and jazz to form something entirely new, is both a personal pursuit of linguistic preservation and a deeply impassioned effort to return something precious to the Walostoqiyik people before it is lost for good.

Today, there are less than 500 people who speak the Wolastoqey language remaining at home here in Canada––Dutcher is one of them. His hope as an artist and as a Walostoqiyik (Maliseet) person is that his music will engage a new generation of young Indigenous people, inspire them to once again access the songs of their rich musical past, and in turn ensure the existence of their Nation’s most coveted traditions long into the future.

How did you discover William Mechling’s recordings and how did they come to form the foundation of your new album, Wolastoqiyik Lintuwakonawa?

Well, the archival recordings sort of came to my knowledge while I was thinking about the traditional music of my community. So many of us were gathering and singing songs in a style or language that wasn’t necessarily our own and that prompted me to ask why? As I was having these conversations with the folks around me, people started to say: “If you want to know about our traditional music, you’ve got to go check out these archives!” So I went.

At first, it was a bit of a goose chase but I eventually tracked them down at the Canadian Museum of History in Gatineau, and that’s where this project really began.

I got some funding from the Canada Council for the Arts to travel to the museum and sit with the archives for about a week. During that time, the archivists were really helpful in showing me everything that Mechling had spent seven years in our community collecting. He looked at our belief system, our language, and our traditional stories. He took photographs––there was just so much there. But, most interesting for me as a musician was to look at the music.

Mechling collected over 100 phonograph recordings between 1907 and 1911 and what is so alluring for me about that, other than the fact that they are some of the earliest known recordings of Indigenous people ever, is that they’re also from my community so there is a level of personal connection there. To be able to sit down and hear what my ancestors were singing and thinking about and just what their world was all about, that was a really special thing.

You brought these recordings out of archival storage to notate, re-arrange, and re-record them. Talk about that process and what motivated you to engage in this musical excavation of sorts.

Growing up I was taught that there was so much that could be done with a song––you can keep a language alive or pass on messages about who we are as people. Unfortunately we haven’t been singing songs written by us and about us, we’ve been singing other people’s songs because there has been less and less accessibility. I see that as a big issue.

For me I guess the motivation to do this project was to really start thinking about singing in the language and really just singing those traditional melodies that are rooted in our lineage and in the world around us.

A lot of our traditional songs were action-based. There would be a song for a wedding dance or a song for picking cranberries or a song for going down the river; every song was so embodied in its purpose. Once we start bringing that back and thinking about song as land-based practice, that’s when the language comes back and that’s when we get back on the land and really start to reengage who we are as Walostoqiyik people.

For me that’s the most important goal of the project.

The album has been described as being “part composition, part musical ethnography, part linguistic reclamation.” Talk a bit about each of those three elements and why they are so integral to this project.

The three components of this project sort of all revealed themselves quite naturally. The question for me was do I plainly duplicate what I’m hearing and sort of just replay those melodies for people or do I go another route? Do I try to bring something new to them and reimagine them in a way that speaks to my experiences and where I am sort of located in all of this as a young Indigenous person in this country? For me that really became a more interesting direction and that’s how composition sort of seeped its way into all of this.

At the time I was also studying classical music at school and I think there was a bit of discord in terms of how music was made in a community context and how it is made within a Western institutional environment. I guess I was looking for a way to bridge what I was raised with in terms of musical community and this idea of really lifting each other up and coming together around music, and I was really struggling to find that within classical spaces.

The ethnographic bit hinges on almost two years of research and really spending time with the archives themselves.

Most importantly though, this project has always been about giving something back to my community, and language is a really big gap. It’s something people are looking to access so I’m grateful to be working with speakers and elders in the community and they’ve all been really encouraging around that. I’ve really relied on them to hold me accountable and to do this work in the way it needs to be done. They’ve all been so valuable in terms of providing me with the resources I need and helping me translate because they really do care and want to make sure that what is enshrined is accurate.

Talk a bit about why the preservation of the Wolastoqey language is so important for you as an artist and as a Maliseet person.

The preservation of language is the most integral part of this whole project because when we lose a language we’re not just losing words. What we’re really losing is an entire way of thinking and of moving through the world.

I’ve been living in Toronto now for three years and linguistic traditions among the Anishinaabe and among Cree people are really very strong. But, if we keep going at the rate we’re going now, then those are some of the only indigenous languages that are going to remain.

My linguistic group out on the East Coast has about 500 speakers left at this point and most of them are our elders. I’m hoping to be able to work with our young people and inspire them to think about what it means and what it takes to actually save a language.

Do you feel a sense of responsibility to bring these traditional Wolastoqiyik songs to a new generation of people?

Absolutely. For me working with the archives and doing this project has been this very salient idea but I’m now starting to think about what happens after that and how we continue the conversation around responsibility and reconciliation, if that’s a term we want to be using. I think about where that falls and whom it falls on, and how we can work together, I guess.

I think of my mother who grew up in a time when her indigeneity wasn’t something to be proud of, and certainly wasn’t something to be applauded or shared in a public space. For her, it was something she was sort of taught to be ashamed of and there is a whole generation of people out there who grew up within that framework. Thankfully, that is starting to change but it’s really important that this generation, which has the tools and the ability to put its focus on saving our language, start to think seriously about how to do that because it is truly endangered.