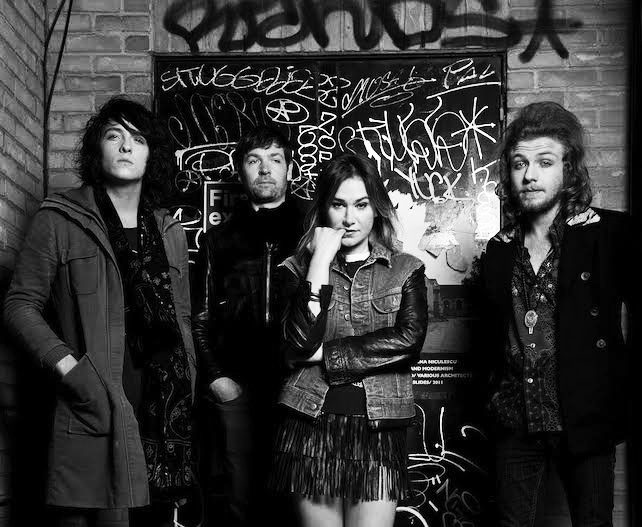 The thing about the blues is that it’s just totally primal. It’s the from the gut sound that your soul makes when it’s weeping. It’s deep and dark. It’s hungry and wailing. And yet, it remains so damn appealing.

For Vancouver based blues-rock band No Sinner, the last six months have been a dream come true. After penning a deal with European label Provogue Records/Mascot Label Group, they’ve recorded their debut album Boo Hoo Hoo, which is slated for release on June 24th, they’ve hit the road across the US (performing seven shows to crowds at SXSW), they took on Toronto during Canadian Music Week and are currently touring Europe.

Fronted by powerhouse vocalist Colleen Rennison, a hard-singing, hard-loving, hard-drinking, hard-working throwback, there is something so incredibly raw about this band. Her gravelly, soul infused, whisky-drenched voice carries the weight of artists like Janis Joplin and Nina Simone, and absolutely oozes sex appeal.

While on a stopover in Pennsylvania, we spoke with Rennison about the ups and downs of life on the road, the making of their debut album, her love for 90’s girl groups, Betty White, and whether or not the definition of success is being able to travel the world or simply to play music you love in a sweet bar in Asbury Park every night.

Yeah, I haven’t been in the same city for more than 20 days in something like six months. I think we’ve been to more places in the last six months than we have in our entire lives; it’s definitely a trip. It’s been really cool though––there are ups and downs and hits and misses, obviously––but it’s just about living it and putting one foot in front of the other type of thing.

I mean it’s grueling work and it’s all it’s cracked up to be in some ways, but not in the ways you think. It’s certainly not all groupies and parties all the time [laughs], it’s more like lonely drives, getting angry at your best friends and throwing temper tantrums. It does feel a bit like you are at the mercy of your handlers because you are constantly subjecting yourself to these completely unknown situations, but at the same time there are so many people all over the world going out of their way for you to either get you dinner or drive you where you need to go or promote your show; it’s pretty humbling.

You guys are gearing up to release your debut album, Boo Hoo Hoo, on June 24th. Can you tell me a bit about the writing and recording process?

Yeah, it was interesting because we self-released a lot of this material a couple of years ago when we first became a band, but what happened with Mascot––which is a really great European label, and they’re the reason we’ve been on tour and everything which is super rad––is that they picked it up and wanted to release it. We actually recorded a couple of new songs: “Devil on My Back,” “Work Song” and “September Moon,” and those were all done the week before it was released in Europe.

What’s nice is that this record is still very much us coming out of the gates and really just putting our cards on the table. I think it’s really honest, and I like that about it because we didn’t have too much time to think about who we wanted to be or what we wanted to do; we just put out whatever came out of us. We primarily recorded with Warne Livesey, who is a good old friend of Ian, our drummer, and it was just like five hot days in a studio. Here’s a side note for you, there is a studio in Vancouver called Greenhouse and it’s located right next to a chicken factory, so everyone whose ever recorded there knows the horror of being there during the summer. It could be the most beautiful day ever and you’re stuck in this dry, hot room all day and then when you go outside you can’t even enjoy it because it reeks of dead chickens [laughs]. Anyways, that’s how we recorded a lot of the songs and then we did the last few at a place called Ogre.

We’ve got different bass players all over the album, it’s kind of a bit of a Frankenstein of a project but I think it feels cohesive and that it meshes. I am glad though, that we were able to augment it with some more recent stuff before we released it. I mean we had been sitting on these ten songs for quite a while just waiting for the right time to put it out there and I can’t remember who said it but there is that saying: ‘you have your whole life to make your debut album and six months to make your follow-up,’ so we’ve just been really lucky that we’ve been able to work on these songs for so long.

So as you were saying, you guys recently signed a worldwide deal with Provogue Records/Mascot Label Group. Prior to signing with them, what was your biggest struggle as an independent band: touring, recording, garnering that label interest and really taking things to the next level?

We’ve never really been an end result kind of band with specific goals; we always just kind of wanted to take it as far as we could. Before Mascot, we were really just planning on doing another self-release and continuing on the grind––there’s not much else you can do. You just have to keep playing shows and hopefully get bigger ones, hopefully get more likes on Facebook, more views on Youtube, and hopefully meet more really rad bands you enjoy.

No matter what, we’re going to have to do this. We don’t do this because we want to we do it because if we didn’t we’d probably shrivel up and die. I mean sometimes it’s pretty painful, and it’s getting a bit easier now with some backing, but it’s just sort of a means you have to take on in order to not go crazy and it’s whatever you have to do in order to do that, you know?

Your sound is very much blues-infused rock and roll, but you bring a real sort of raw, gritty, soul influence to the band as well. Did you grow up listening to a lot of blues, jazz and soul artists? Where does that come from?

Honestly, when I was growing up I was listening to a lot of 90’s girl groups like Destiny’s Child, En Vogue, Brandy, Aaliyah and Lauryn Hill; I definitely used to bang on a lot of hip-hop tracks with my friends in their bedrooms [laughs]. My first experience with music was really through hip-hop. I honestly didn’t really listen to a lot of white musicians, they just never appealed to me. As I got a little bit older I started to listen to more rock and roll and all that history that came before it like Muddy Waters and Lead Belly, Howlin’ Wolf and Big Mama Thornton. I never really had any friends that liked rock and roll though––it just wasn’t around.

When I was growing up in Kitsilano, Napster just came out and everyone thought they were Easy E, so it was a bit of a nightmare [laughs]. I tried to convince myself that was the kind of music I liked because that’s what was around, and I did find some truth in it for myself so I was able to sort of tolerate the scene but yeah, I think that’s what you’re hearing. I also listened to a lot of Motown and just a lot of big, dark voices.

It’s funny, I remember hearing The Black Keys for the first time, granted they’re super played out now, but back in the day when there was just such a barren wasteland in pop music, I heard them and thought ‘they get it,’ ‘they listen to what I listen to,’ ‘they know the blues––they know that shit.’ I don’t really know if we are purposely making the blues––it’s not what we set out to do––it’s just sort of coming out of us. We all come from different shades of it but the blues basically started rock and roll so everyone in the band definitely has an appreciation for the basics. The blues is just primal, it’s the sound of struggle, mourning and pain that everyone can relate to.