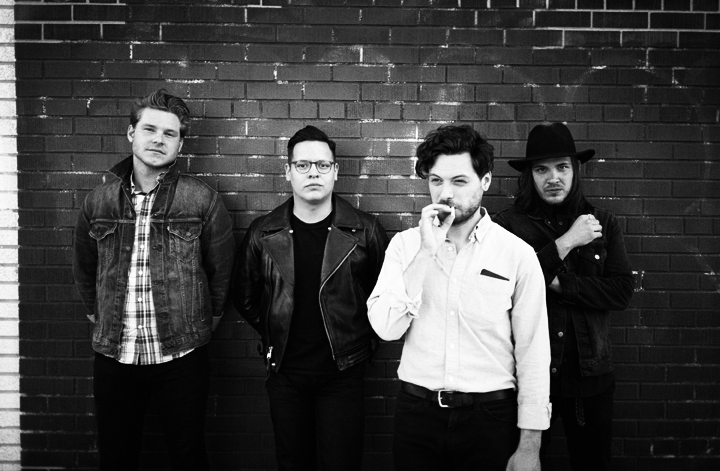 London, Ontario band Single Mothers are a highly curious case. Despite having not yet released a debut album, the band has already garnered a cult following, the support of international press as far reaching as Pitchfork, The New Yorker and BBC Radio 1, and secured deals with both Dine Alone Records here in Canada and XL Recordings abroad. Though they’ve been through a revolving cast of band members since forming in 2009, Single Mothers have managed to keep themselves on the road long enough to tour Canada, the US and the UK. Known for their explosive live show, unrelenting punk rock appeal and a palpable tension that seems to bleed into their music, this is a band with some serious brawn behind them.

On October 7th, they will finally release their much-anticipated debut, a thoroughly traveled album titled Negative Qualities. Produced by Joby J. Ford of The Bronx, the album almost didn’t see the light of day. Though it took two years to complete and was recorded in Los Angeles, Toronto, London, Ontario and New York City, Negative Qualities is an absolute behemoth that will aim to capitalize on the band’s recent buzz. We caught up with frontman Drew Thomson to talk about how the band managed to go from small town obscurity to internationally known in just a few short years, and about the experiences that help to keep Single Mothers humble and hungry.

You guys are about to release your much anticipated debut album, Negative Qualities via Dine Alone and XL Recordings, where are you guys at in terms of headspace right now?

Have you begun to play new stuff while on the road and are you finding the crowds to be receptive?

Oh yeah totally, they’ve been pretty great. I mean some of the songs we’ve been playing for quite a while now but I’m always surprised to hear people picking up on certain songs and singing them.

You guys have garnered a huge amount of interest over the past little while both within the scene and amongst other bands, but also from the media. That is definitely a feat in light of the fact that you are just now releasing your first full-length album. How did you guys manage to do that?

Man I don’t even know, I guess we’ve just kept playing as much as we possibly can. We’ve toured on our 7” [S/T EP] for as long as we have because it’s all we have. We have been lucky to get on some tours, so we’ve really just tried to stay on the road until we couldn’t anymore.

Much of your early success has been attributed to the fact that you guys sold your belongings, bought a van, booked your own American tour and got out on the road. For some reason, be it financial or whatever, it seems that touring the old fashioned way and putting in that face time isn’t something that every band is out there doing any more. I’m wondering if you can speak to how necessary and feasible it still is to growing a band’s following because you guys are a great example of what can become of it.

Yeah for sure. I mean when we did our first tour, our guitar player booked it and we hadn’t really even played outside of Northern Ontario much, so we went straight to the States. Everything is just so much more accessible in America, you know? You can play 11 shows on the East Coast and everyone is only an hour’s drive, or you can play 7 shows in Canada and have toured the whole country. So, I think for us it’s really been a matter of getting ourselves out on the road and forcing people to pay attention to us.

The thing about doing the DIY tours is that when you spend seven weeks with five guys in a 1997 Chevy Venture mini van in the middle of the summer, and you’re sleeping in it in fucking Walmart parking lots, everything from then on is pretty much amazing. [laughs] We’ve done that so now sleeping in a McDonalds parking lot in a twelve-passenger van is like being in a hotel room.

Without that appreciation and without breaking up on those first tours, which we were so close to doing so many times, it really made us stronger and enabled us to appreciate what we do have now. We played a show two nights ago to like eleven people and made forty dollars and we still don’t mind doing that, even three years later, because we know that it has been worse. Those things really help to establish a foundation for your expectations.