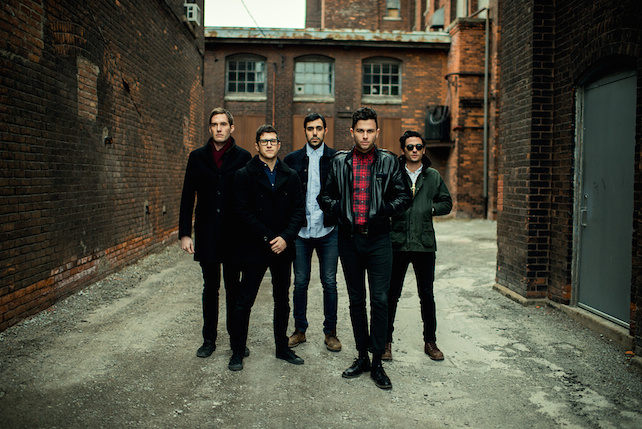 Since dropping their debut album Jackson Square to much praise back in 2008, Hamilton indie-rock darlings the Arkells have spent a great deal of time carving out their place both on the road and on the airwaves. Having built their reputation on the back of a relentless number of well-crafted radio friendly hits like “Pullin’ Punches,” “Oh, the Boss Is Coming!,” “The Ballad of Hugo Chavez,” “Michigan Left,” “Kiss Cam” and most recently “Come To Light,” in addition to a stellar and widely talked about live show, the Arkells continue to prove that there is something to being a humble, working class indie rock band with heart.

In anticipation of the Arkells third studio album, High Noon, which dropped earlier this week and is full of classic heartfelt Max Kerman vocals, swingin’ melodies, brassy-guitars, tinkering keys and throwback soul, we caught up with the frontman to talk about writing the record in a 150-year old factory turned gay-night club at home in Hamilton, working with producer Tony Hoffer (Phoenix, M83, Beck), keeping their stage show fresh with covers of Iggy Azalea and the band’s one true love––performing live.

You guys just released your third full-length album, High Noon, on August 5th. Tell me a bit about writing this record at home in Hamilton; I’ve heard you guys did most of your work in a 150-year old factory turned gay-night club, is that correct?

Yeah it is. The number one thing we tried to avoid when picking out a space to write the record was that we didn’t want to be in a rehearsal factory surrounded by thirty metal bands playing at different speeds. Have you been to a rehearsal factory in Toronto? They’re like purgatory––they’re terrible! Anyways, we found this building right in downtown Hamilton, which is a five-minute bike ride from my place, and it just had a lot of character to it.

The building itself was just purchased by these people who really wanted to keep it in the arts and within the gay and lesbian community, and so we just asked if we could take a room. We had these big bay windows so we could actually get some real sun light in there, and we worked five days a week, which was really cool. It was nice to have a little more time than we maybe had on Michigan Left, and really kind of workshop the songs.

So, being that Hamilton is home for you guys, was that the primary reason you chose to write the record there––to be in your own space and environment this time around?

Yeah, honestly, I really didn’t want to commute––that was a big thing. It was like if I can find something that’s in the neighborhood then I’m going to be happy. The space itself is on Hughson Street, which is about a block away from James Street North, so we’d go for lunch and there are a bunch of cool little restaurants there––it’s a new flourishing neighborhood. Plus, you know, lyrically I think there are a bunch of Hamilton-centric themes on the record, just in terms of being around there all last summer––it definitely influenced the songs.

Right, like the first single “Never Thought This Would Happen”…?

Yeah, that one’s really sort of a tale of Hillside Festival in Guelph, which is one of our absolute favourite festivals. The band’s played a lot of festivals at this point, but it’s always fun to kind of soak in the vibes, especially at the one’s where people get to camp overnight––those always seem to come with a story or two.

So after writing the record in Hamilton, you guys actually flew to LA to record with the ever-adventurous Mr. Tony Hoffer (Phoenix, M83, Beck), in Highland Park. Why Tony for this record and what was it like working together with him?

The way we ended up working with Tony was kind of cool. We had actually reached out to a sort of “wish list” of producers that we thought it would be great to collaborate with, but we never heard back from any of them. Then one day about a month later, we received a message in our Facebook inbox from the Tony Hoffer saying, ‘hey I came across a song from a session you did, it’s called “Deadlines.” I thought it was really cool and if you ever want to record that song, let me know.’ We were just like, ‘well even though that song’s been out for about four years now, we’re really huge fans!’

As it turns out, his manager had to switch companies and his email address had changed, so he never got our original note, which was pretty serendipitous and cool. From there, we just started planning it all out. We initially asked Tony if he wanted to come up and record in Hamilton but he has a kid and his own space––a cool little modest studio in LA. It’s so funny, when you tell people you’re recording in LA, I think most people’s brains immediately go to a Guns N’ Roses, 80’s, Sunset Strip kind of thing, and our experience was kind of the complete opposite.

The Highland Park neighborhood is kind of what Queen Street West in Toronto would have been like twenty-years ago. It’s sort of becoming gentrified, there are a lot of new immigrants there and lots of cool little coffee shops, but we just sort of worked a lot. We’d go in everyday at 10:00 or 11:00 am and we’d be there until 11:00 pm. Then we were just kind of tired, you know? We went out downtown a couple of nights, like to a Lakers game and a Dodgers game but other than that it was sort of all business. That’s what we were really most excited to do though, to dig into the songs and branch out and collaborate with someone new cause we had never really worked with anybody outside of the band.

You know, it’s funny but so many of the bands that I’ve spoken with have these horror stories when it comes to working with producers they’ve sort of always long to work with. I guess sometimes things just don’t gel. Did you guys find that you guys clicked with Tony right away?

Yeah Tony was great. That’s another thing, he’s totally not a typical LA, pony-tailed, drug addict producer. In another life, Tony could probably be a technician working in a science lab or something. He’s incredibly meticulous, so organized, he has a ton of patience and he has the vision.

I think one of the hardest things about working with a band is probably managing everybody. When you’re working with a solo performer that part of the job is perhaps less work, but when you’re working with, in our case, five guys with five different personalities, just getting the most out of everybody is so important. Tony has worked with so many bands, everybody from STARS and The Kooks to M83 and of course Beck, so he’s dealt with a wide range of personalities and is really great at that.

I should also mention that we ended up finishing the record in Toronto. There were a few extra songs that we wanted to record and we ended up working with Eric Ratz, which was really fun as well. For those songs we just wanted a really honest, big, rock and roll sound. Eric engineered the Metric record and worked on some early Billy Talent records too, so it was really cool to work with him. I think the songs were asking for a raw rock and roll thing and he’s really great at that.

Let’s talk a bit about touring because over the years you guys have really become known for your extensive tour schedule. I think getting on the road and of course working your way up onto legitimate tours, is probably one of the more difficult things bands face these days. Can you speak a bit about your time on the road and perhaps how that has filtered into the band’s overall success?

Yeah, I think for better or worse, people are always saying that they love to hear the songs live, and a lot of the time that’s when they really come alive for people, you know? I also think that most bands are constantly striving to make their records as good as their live show. I know that Bruce Springsteen talks a lot about that. I mean, his live show is pretty electrifying and capturing that on record is a really tricky thing. I think on this album we captured a lot of really great aspects of the band’s live show in addition to making a studio record.

We really do love playing live and I think that is just really intrinsic to our personalities. Some bands love being in the studio and working really hard just crafting the songs, and we like that too, but we also just really love playing for people. Performing is definitely its own craft and we’re always working on improving the live show to keep it interesting and captivating for people. I think the most gratifying thing for me is just seeing them singing the songs back, but sharing the music so that other people get off on it is probably the most important thing for all of us.

The reality is we probably spend a month in the studio every two years or so, so we have a lot more experience and a lot more time on the road to get good at it. I don’t know, the studio always feels new, at least to me, where as the live show is something we’re working on everyday.