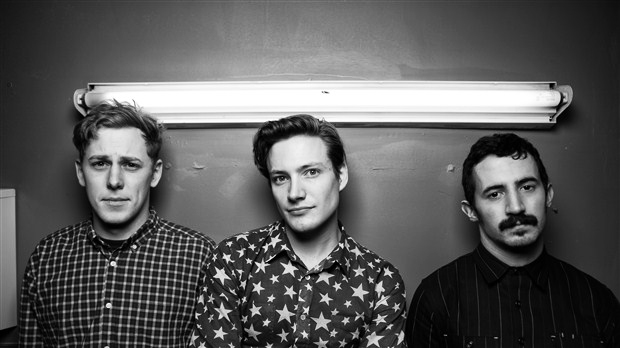 I don’t know what it is about bands from Hamilton, but they always seem to come forth with a thick layer of dirt, like Pigpen from Charlie Brown. They appear to revel in the fuzz of noise and thick distortion, brash drums that pound feverishly like the beating of an exasperated heart, and desperate, howling vocals that escape with intention to stomp about wildly.

Now, whether or not that’s a bunch of bullshit is anyone’s guess. Perhaps the place has nothing to do with it and we’re just starved for something to believe in, something like the myth of “grunge.” As I found out while talking to Luke Bentham (guitar / vocals) and Dave Nardi (bass/vocals) of Hamilton’s The Dirty Nil, it isn’t the geography of the place that drives the story so much as it is the blood, sweat and kinship of the bands that exist within and support it’s local scene.

The Dirty Nil is the kind of band that plays loud, distorted out of control rock and roll, and they do it because they couldn’t do a damn thing else if they tried. They have a particular affinity for releasing 7-inch vinyl and most recently put out an EP titled SMITE.

Are we talking about the next Seattle here? Probably not. But, these are strange times we live in and even though music has never been more readily available, we still find ourselves standing around, scratching our heads and wondering where the fuck all the rock and roll is at? Well, you can call off the search parties cause as it turns out, it’s in Hamilton, Ontario.

There is something about Hamilton that seems to be ingrained in the bands that come out of the city. There’s just something brash and filthy about their sound. It’s something you guys definitely have. What’s that all about?

Luke Bentham: Well, we’ve talked a lot about Hamilton and the city having a “sound,” and I know a lot of people have tried to point to something like that, but when we’re here on the ground level, it’s something I have a hard time seeing. Most of our friends have loud, obnoxious, electric guitar bands so that’s kind of a unifying thread but most of our bands also sound pretty different from one another.

Dave Nardi: Hamilton has this sort of exterior aesthetic, and I think a lot of people look at bands from the city through that window. I mean it’s a pretty cool thing and it’s all real if you see it right? If people see and hear cohesion I’m certainly not going to tell you there isn’t any there.

I’d like to talk a bit about the rock scene in Hamilton. You mentioned being on the ground level. What is it like being a band at the centre of that and is there a sense of community there?

Bentham: We all support each other’s bands so I would definitely say there is that sense of cohesion and community here. Everyone in Hamilton who plays in a band is an active member of the scene. Everyone goes to shows and buys each other’s records so there is a very communal feeling. We all root for each other.

Nardi: Yeah, there is definitely a scene here as well, but there are also many different factions. There’s a lot of cross-pollination going on. There are the “Hammer-city” shows and those are more like hardcore shows with bands like Born Wrong and punk bands like TV FREAKS and Snake Charmer, but then at the same time they’ll kind of, as I said cross-pollinate, and play with other bands as well. There’s a promotions collective in Hamilton called Perdu that’s run by members of WTCHS, and they put out various releases and put on shows and they kind of have their own cool bands too. Everything is very inclusive and everyone is always kind of playing together.

Being from a big city like Toronto, I find that a lot of people tend to dub themselves “Toronto bands,” but I just don’t feel that sense of community here. I love that you guys are all out at each others’ shows and buying each other’s records because those are the things that really help a scene to thrive.

Bentham: Yeah, Toronto is such a huge, diverse city with a trillion bands in it, but I’m sure that if you are on the ground level in some of those bands there is a similar sense of solidarity. I guess it’s just easy for people to have a sort of tidy view and aesthetic about a place like Hamilton because of its size.

Nardi: I definitely think there is something to being a slightly smaller town; there is more of a kinship. In a city like Toronto there might be 200 other bands doing exactly the same thing you are so it’s nice to be a part of a smaller pool. There also isn’t a whole lot of genre exclusivity here in Hamilton. Chances are that you probably already know the other bands that are playing similar sounding music to what you are, but you can also go to a random show and there will be a whole bunch of members of different bands there. No one’s really biased. Everyone just kind of supports everyone else.