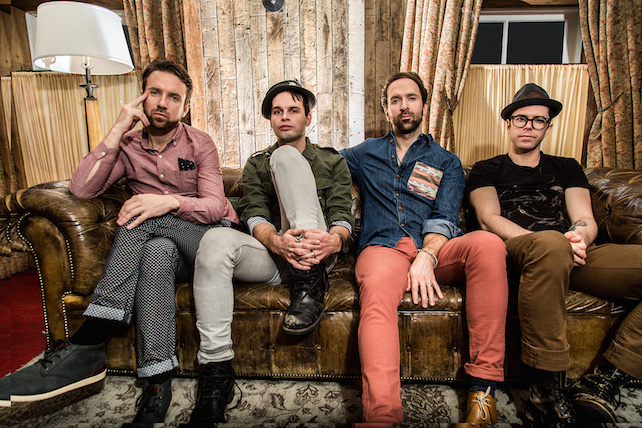 After ten years, five albums, and 13 top 10 Canadian radio singles (including two number one’s), The Trews have more than earned their place amongst Canada’s top rock acts. Recently, The Trews released their fifth album, a self-titled project which was produced by fellow Canadian Gavin Brown, and we caught up with guitarist John-Angus MacDonald to talk about writing and recording, the band’s hugely successful PledgeMusic campaign, giving their core fanbase the ultimate fan experience, bumming around the old Healey’s Roadhouse in Toronto with Serena Ryder, and how they managed to sling a couple of gold records while the music business crumbled at their feet.

So, it’s now been 10 years as The Trews and your self-titled fifth album came out this week. What kind of headspace are you guys in?

We’re excited! I guess we’re always really glad when the day finally arrives because we’ve been working really hard on it for over a year if you count the songwriting and everything. We started writing in about January of 2013 and went on and off until about May. We did demos all the way through the summer, locked down a producer in the fall, then went in and made the record, and now it’s just been all this build-up and anticipation so it’s fun that it’s finally here.

Can you tell me a bit about the writing and recording process of this album?

We decide we’d really like to separate the writing and recording process on this record. On the last one we sort of went into the studio and wrote and tracked simultaneously, whereas this time we wrote and wrote and then recorded it, so we went about it that way. We wanted to go in with a bunch of finished songs because the studio can be really fun when you have all your stuff sort of laid out in front of you––it can get really frustrating when the songs aren’t fully discovered. We worked with Gavin Brown at Noble Street in Parkdale in Toronto, and I guess the best way to put it was that it was just a really quick process. Within the first 2-3 days we had finished all the drums and then after that it was just about tackling all the other instruments. It was just a lot of fun to be able to sort of experiment with things like different textures because when your mind is not on the songwriting you can just really concentrate on how the thing sounds.

A little while back you guys launched a hugely successfully PledgeMusic campaign which awarded pledgers with everything from Skype chats and drum lessons to lifetime guest list privileges as well as the opportunity to contribute vocals and hand-claps in-studio on a handful of songs. For you as a musician, how beneficial is a direct-to-fan platform such as Pledge for bands today and what was it like working one on one with those fans and bringing them in to the process?

As far as the direct funding goes, I think it’s a step forward––it’s really quite progressive–– and I think it’s a positive thing for the industry. You know, it’s been 10 years now or maybe more since the old institutions and old structures have really started crumbling, and this is a sort of positive way forward. You’re going in to direct partnership with the primary user of your product, which is your fans, and cutting out the middleman; it’s a really great business model when you think about it. It’s always been the investors and third parties that sort of do the medalling.

I’ve always said that if this kind of thing existed when I was thirteen, I would have been all over it! I would have loved to be able to get on the horn with my favourite rock bands and hear bits and pieces of songs before they were done. I would have loved that as a fan and I think sometimes you really have to put yourself in those shoes even if it might be hard to believe that people feel that way about your own band.

Well, our first album came out in 2003 so that’s pretty much right at ground zero in terms of when everything started to change. I think the biggest difference is the metrics; how we measure success has changed. Also record sales are not a very accurate barometer any more either. Things like YouTube views have become really important and are sort of indicative of whose watching where and when.

The industry was just much more organized ten years ago. There was the music station that played music videos and the record store that carried your album and the radio station that everybody listened to––if you had two or even all three of those things going on for you, you were a big successful act. We had those things going on early on in our career, which was great. We were even around enough to get some gold albums and experience some of the more traditional yardsticks of success so I’m definitely grateful for that, but it’s just totally different now.

I think it’s become much more of a niche industry today. I mean kids are still kids and they still love music and they’re going to continue to find new ways, but their bands are just never going to know what it’s like to get played on MuchMusic you know? These days I’ll come across certain bands that I’ve never heard of and realize they have a massive following, I don’t think that could have happened ten or fifteen years ago, it just wouldn’t have. It’s kind of indicative of the time we’re in culturally and globally––everything is just fractured. It’s not necessarily a bad thing it’s just different. So, yeah I think something’s took a hit but other things went up and the things that did go up have been really important and useful to our career as well.